The sweeping view from the campus green encompasses the Thames River valley and broad expanses of Long Island Sound, interrupted by islands and punctuated by lighthouses. In the foreground of this vista is the city of New London. 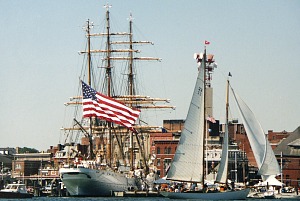 Once home to a great whaling fleet, New London was connected by trade with the major ports of the world, favored by its location midway between New York City and Boston. Today, residents of New London represent a broad spectrum of racial and ethnic backgrounds. Distinct communities of African-Americans, Italians, Latinos, Greeks and Lebanese add texture to New London's cultural fabric. From the Irish came New London's native son Eugene O'Neill, a Nobel Prize winner. Native Americans are a cultural force, with the Mashantucket Pequot Museum, a research facility of national stature, recently affiliated with the College's museum studies program.

The New London community played a prominent role in Connecticut College's history by contributing the seed money to found the institution.

Today, the College is returning the favor. Its professors hold key positions in neighborhood coalitions, and its students work with children in local schools. We partner with more than 50 businesses and organizations in the greater New London area that offer internships, serve as case-study locations for coursework, and provide opportunities for real-world learning. The College's community social outreach programs are cited as among the best by editors of the guidebooks "The Best College for You" and "Colleges with a Conscience."

Connecticut is the southernmost of the six states referred to as New England. Because the College is so close to the ocean, the climate is generally mild. Average daytime temperatures range from 81° Fahrenheit (27° Celsius) in the summer to 32° Fahrenheit (0° Celsius) in the winter. Students appreciate all the seasons, from autumn's brilliant leaves to winter's snow to spring's warm, sunny afternoons.