During the past thirty-five years, Ted Hendrickson's photographs have explored the nature of landscape as image. Ranging from the man-made scene of the built environment to the wooded and coastal landscape that comprises what is left of "Nature" in Southern New England, Hendrickson's laconic personal views can be simultaneously poetic, comic, tragic or mysterious. His work records layers of geologic and human history in a concise, straightforward style without overtly injecting the drama of the picturesque or the clever abstractions of the camera’s frame.

Current interests include working on a series of "portraits" of local glacial erratic boulders left behind by the melting edge of the Wisconsin Ice Sheet some 18,000 years ago. Following this path, a series of images, "Questions for a Stony Landscape," explores boulders and placed stonework as marking the man-altered landscape and its potential evidence as work and ritual.

Also ongoing is a group of large panoramic landscape images formed from three connected (triptych) wide-angle photographs that encompass 180° field of view. These sharp focus, documentary-style images concentrate on the local landscape in transition and the landscape of Ireland, exploring both mystical and mundane aspects of this ancient land in a project called "Time in the Irish Landscape." 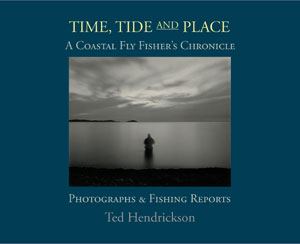 A fly-fishing enthusiast, Hendrickson's Fly-Fishing Landscapes series is a visual diary of the angling experience of a saltwater flycaster. They are collected in his recent publication, "Time, Tide and Place: A Coastal Fly Fisher’s Chronicle," (ISBN 0-9773725-0-2), which combines landscape photographs, fishing reports and collaged elements into a unique journal of an angler’s year. See his work at: www.tedhendrickson.com.

A native of New London, Conn., Ted Hendrickson studied photography at the University of Connecticut with William E. Parker, where he received B.A. and M.F.A. degrees, and at Rhode Island School of Design with Harry Callahan, where he earned a Master's degree in Art Education. Hendrickson's work has been featured nationally in numerous one-person and group exhibitions. He received a commission from the Connecticut Commission on the Arts to photograph the towns of New London County for permanent exhibition at the New London County Court House. His work is included in many prestigious public and private collections.