Almost a month to the day since the shooting of an unarmed black teen by a white police officer in Ferguson, Mo., more than 400 students, faculty and members of the community gathered in the student center for an honest and open – and often passionate – discussion about race.

“Feel free to ask me questions. If we’re going to really talk, let’s really talk about it,” said Christopher Dean ’15. “Ask me how it feels to be racially profiled and put in handcuffs.”

For the next two hours, students spoke about how Ferguson is inspiring them to take peaceful action and discussed ways to address racial inequities and injustices both on campus and around the world. Some students challenged each other to speak out or write about their own experiences and opinions and to talk honestly with their peers about race. Others want to reach out to the New London community and connect to local chapters of organizations like the NAACP. Students from the College’s chapter of the Roosevelt Institute Campus Network – a national organization that engages college students in public policy issues – invited their classmates to lobby legislators to address intolerance and inequalities in the criminal justice system.

The event, “Why Ferguson Matters,” was organized by Associate Professor of Religious Studies David Kyuman Kim, and sponsored by the Center for the Comparative Study of Race and Ethnicity, the Dean of the College, the Dean of Students, and the Residential Education Fellows Program.

“I was deeply moved and impressed by our community,” Kim said after the event, known as a “teach-in” at Connecticut College. “The intense energy and evident commitment in that room spoke volumes to the high quality of the collective character of students, staff and faculty.” 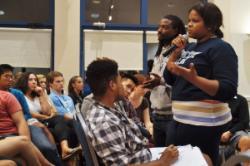 Bria Sawyer '15 was one of dozens of students who discussed ways to create a more inclusive campus.

Students and faculty members said Ferguson is a pivotal moment in American civil rights and race relations that will open the eyes of a generation and inspire them to enact lasting and meaningful change.

The attendees were also encouraged to seek out Connecticut College faculty and staff committed to diversity and inclusivity. Jasmine Kelekay ’15, president of Students Organized Against Racism, said there are many student groups on campus devoted to these issues. “Find them, engage us, collaborate and let’s do something,” she said.

Dean of the College and Senior Diversity Officer Carolyn Denard said Connecticut College students are in the right place to grapple with these issues, and that the conversation would continue. “One of the realities of what happens at a liberal arts college is that this can begin with you,” she said to the crowd. “The commitment you need to make is that we will embrace the humanity of every human being.”

Professor Kim agreed, wrapping up the event with an impassioned call to action. “Remember what it felt like to be here, having this conversation with over 400 of your peers,” he said. “Feel this energy. We have a lot of great and grand ideas. Do something. Act on them.”